Interested in drone photography for landscapes but don’t know where to begin? James Paterson gets you off the ground with his practical starter guide 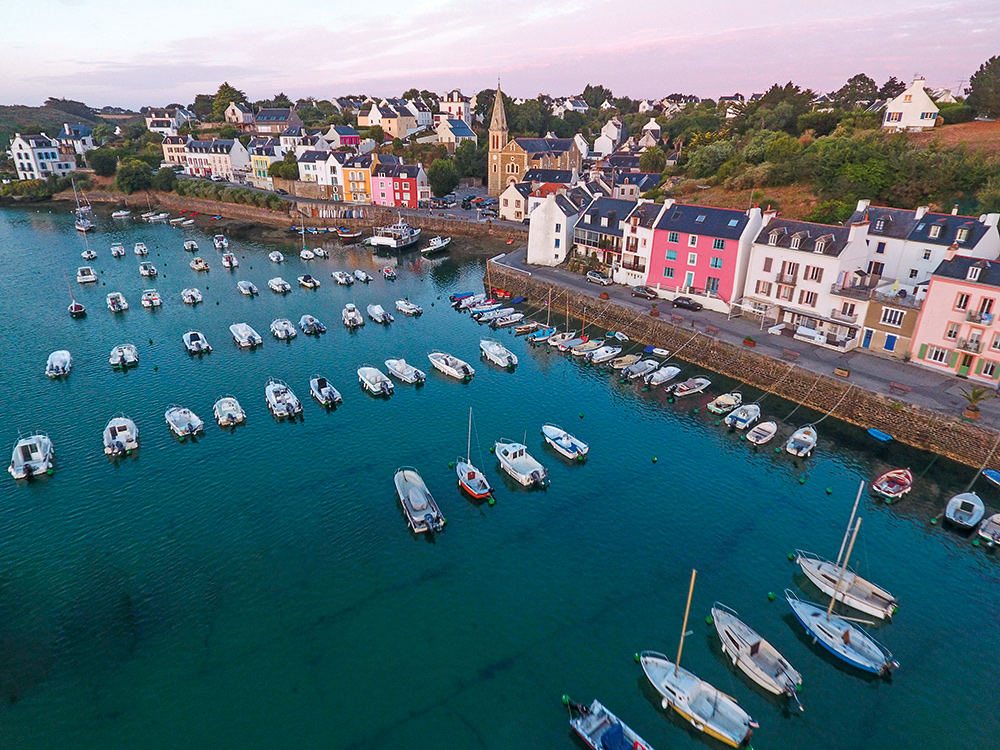 Viewing the world from above can be a magical sight. In the past, getting airborne used to mean photographers needed to hire an aircraft, but these days anybody with a modest budget can get into aerial photography. The drone market has grown rapidly, and not without controversy. But if we put aside all the issues regarding privacy and safety for a moment and focus on how wonderfully adept these new toys can be, it’s clear that this a very exciting time for image makers.

A drone enables you to capture the landscape from a fresh perspective – one that you may not have ever seen before. But these cameras are not just for landscape photography. There currently exist various types of drones to suit different needs: racing drones that come with first-person-view goggles, selfie drones for those after a quick snap, micro drones for indoor flight, stunt drones for barrel rolls and flips, and the much-hyped delivery drone that will soon be dropping online purchases in your garden.

So if you’re looking to buy a drone to take stills and perhaps video, be sure to opt for one with a decent camera. This will be no match for the camera in your kit bag, but resolution and video quality are improving all the time. Most drone cameras offer a level of control that photographers will appreciate, with adjustable exposure settings and HD video.

The drone market has expanded exponentially in the last few years, and lawmakers have struggled to keep abreast. Idiotic incidents like the near misses at London Gatwick and crash landings on the White House lawn mean drones are very likely to become more heavily regulated in the near future. For example, the US technology company GoPro, well known for its action cameras, has recently pulled out of the drone market after developing and then discontinuing its ill-fated GoPro Karma drone. GoPro stated that increased regulations in Europe and the USA were likely to have a big impact on the drone market – one that is admittedly dominated by the Chinese company DJI. In other words, if you’re interested in drone photography, now would be a very good time to take it up, as rules and regulations on what you can buy and where you can fly are likely to become more stringent soon. 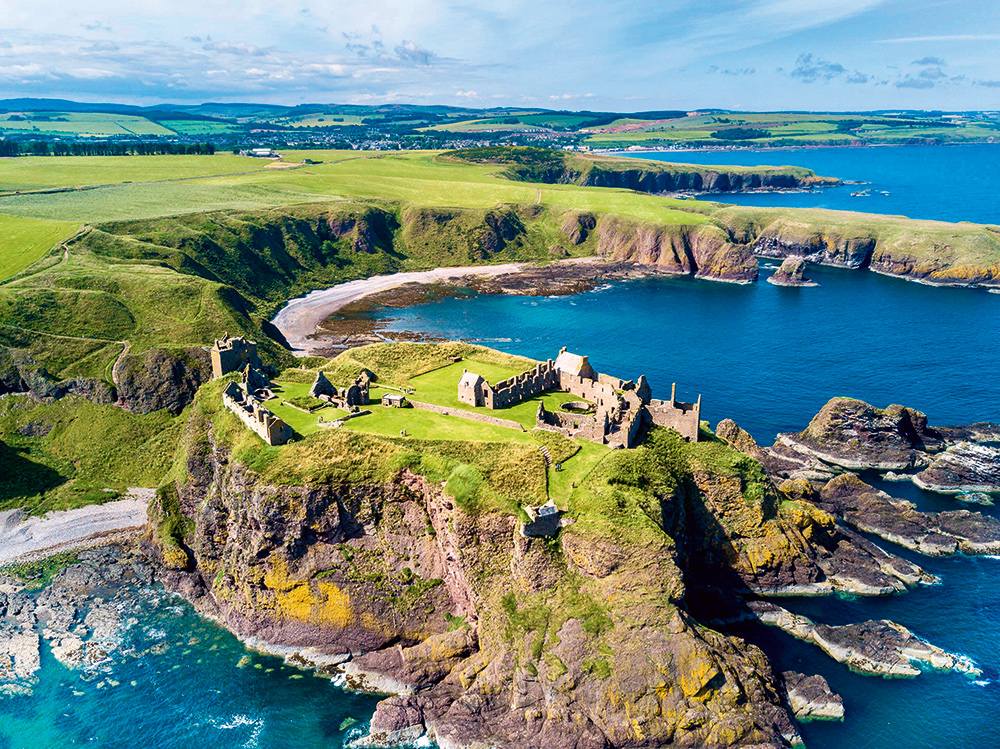 Put Your Mind at Ease

One of the first things to cross any budding drone pilot’s mind is the inevitable panic about crashing the expensive new toy. However, drone technology has progressed at such a rate that, while still always a possibility, crash landings shouldn’t cause too much anxiety.

Many drones, like those in the DJI range, have object-avoidance features, meaning they will detect and fly around objects in their flight path. This goes a long way in preventing crash landings, although the drone can be fooled by bare leafless trees, which makes autumn and winter a particularly hazardous time of the year to be flying in the woods.

Another worry that could be at the back of drone owners’ minds is that their drone could get lost or run out of battery mid-flight. Again there are fail-safes built into most drones to prevent this from happening. A return-to-home feature will ensure the drone flies back to its starting point. So if the battery becomes dangerously low or the connection with the controller is interrupted, most drones will automatically return home.

Many other common features will appeal to photographers and videographers, such as subject tracking. This lets you target a point of interest. The drone will lock on to it, so you can rotate around it or swoop over it while the camera stays locked on. You can also set up drones to track a person or object as it moves, which is great if you want to shoot a video of something like extreme sports. Waypoints are another useful feature. The idea here is that you set a series of waypoints on a map, and the drone will smoothly fly from one spot to another. 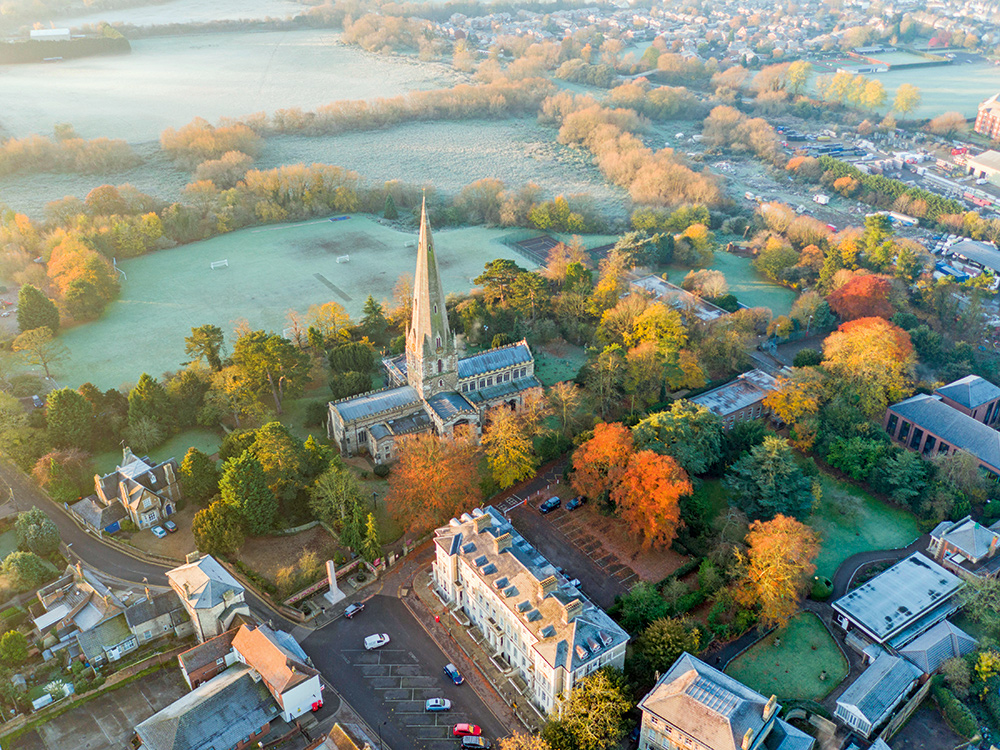 Shooting with a Drone

Like any new piece of kit, a new drone will not automatically result in stunning photographs. All the principles of good landscape photography still apply when shooting with a drone. The biggest factor to take into consideration is the light. A high viewpoint can leave the land looking rather flat, like the view from an airplane window. As always, the most interesting light is often at dawn or dusk when the shadows are longer and the directional light accentuates the rise and fall of the landscape. It also helps to look for patterns, strong graphic shapes and contrasting objects – perhaps the lines in a ploughed field, a black road against snow-covered land or a rocky shore line with crashing waves. 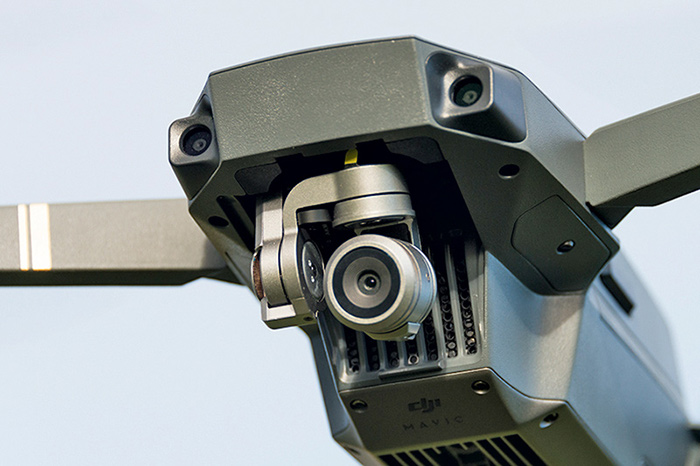 Budget drones, sometimes called ‘selfie drones’, usually have fixed cameras, but serious photography requires a drone with a gimbal head. It will let you tilt the camera up or down independently of the drone’s movement – essential for composing a picture. Stabilisation is also important, especially for video. 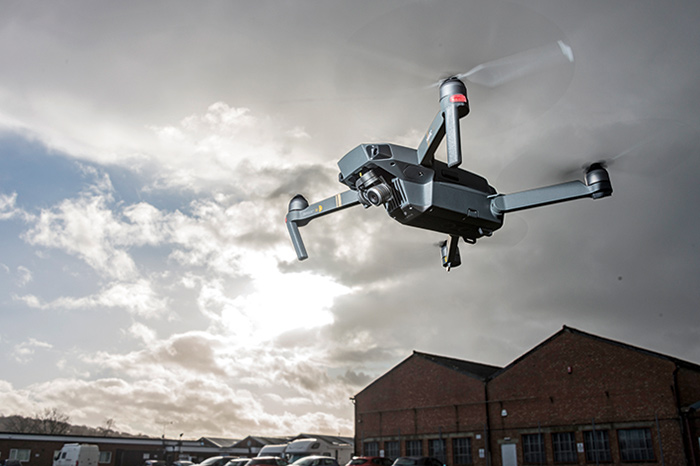 Get an Extra Battery

Battery life is a big factor with drones. Most batteries last for 20-25 minutes before you need to recharge them, so you might want to invest in an extra battery to give you more air time when out on a shoot. It can be frustrating to have the battery run out just as the best light emerges. 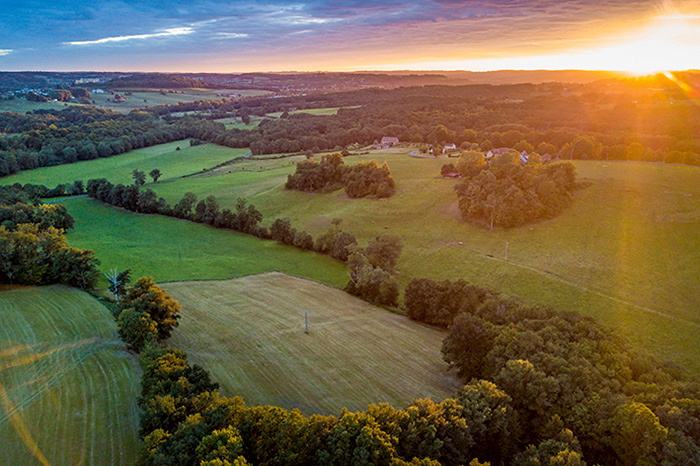 Even at a decent altitude it can be difficult to convey a dramatic sense of height in stills (it’s less of a problem with video). Sometimes it’s hard to tell if the photo has been taken at all. To help prevent this, don’t go too high, and try to include larger foreground objects so that the scene recedes into the distance. 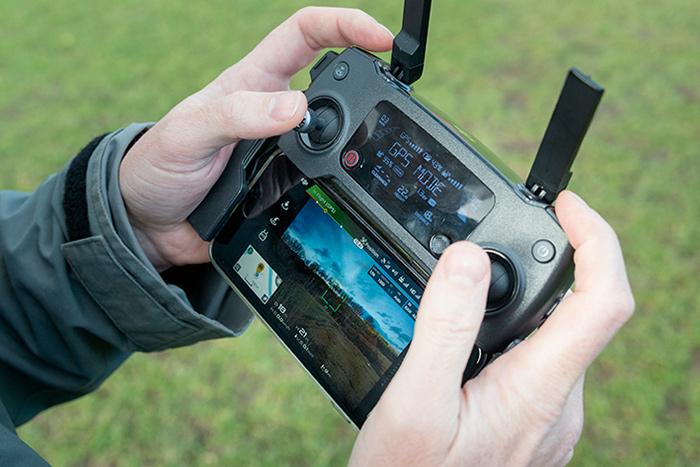 Flying and shooting at the same time can take practice, but many drones have features that can help. For example, the DJI models have intelligent tracking that lets you lock onto people or objects. Some drones, like the Yuneec Typhoon H also let you have a ‘co-pilot’ to operate the camera while you fly. 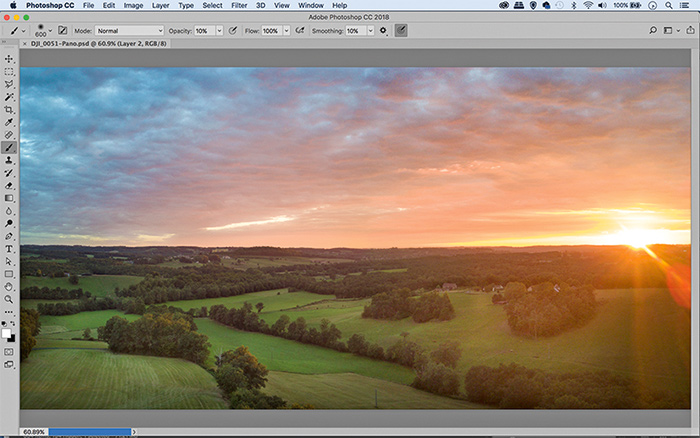 The resolution and image quality of drone cameras can be disappointing for those used to working with DSLRs or mirrorless systems. One way to bump up the pixel count is to shoot a panorama. Drones are mostly very good at staying still and level, which makes shooting a set of shots for a panorama very easy. 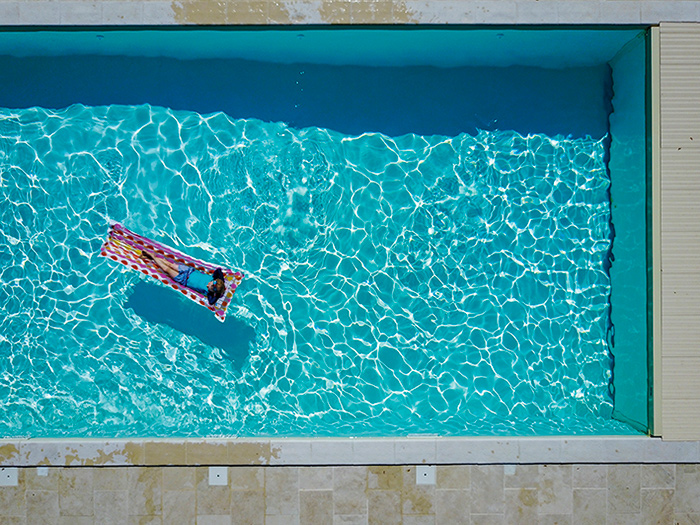 A straight-down angle is definitely one to try for added impact, especially if you can find compositions with strong patterns, vibrant colours or contrasting shapes in the land below. It often helps if the sun is low, as the raking shadows can add extra depth to a line of trees or a row of buildings.

This is one of the most popular drones and for good reason. It features a quality camera capable of 4K video and 12MP stills. Battery life is a respectable 27 minutes, plus it conveniently folds up for carrying around.

Half the weight and price of the Mavic, the Spark is a great choice for beginners. It has a 12MP stabilised camera and handy front-obstacle avoidance, plus a return-to-home feature.

This is a good budget option if you’re looking to get started. It’s easy to fly and takes decent stills, although the camera is fixed, so will need tilting into position by hand before take-off.

A fun starter drone capable of 14MP stills and 1,080p video, with 20 minutes flight time and a maximum range of 300m. It features a fisheye camera that offers a wide view.

This six-rotor drone offers good value for money. It’s capable of stabilised 4K video, comes with a touchscreen controller and a 3-axis gimbal, and has a flight time of 25 minutes. 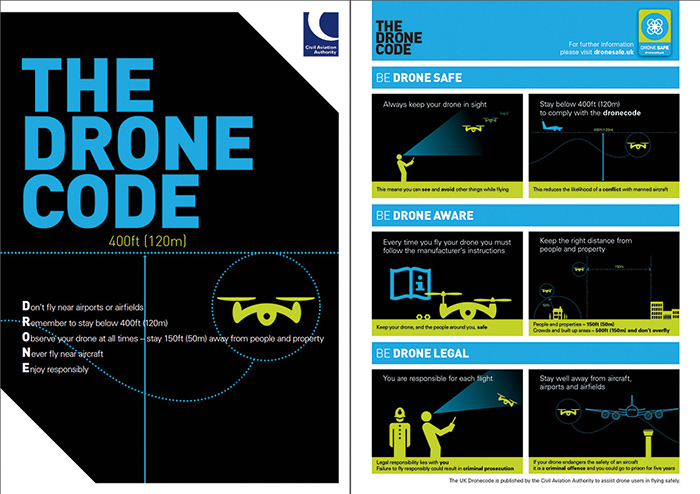 You are legally responsible for your drone, so any misuse could result in criminal prosecution. There are three key things to remember when flying a drone: you must keep it in line of sight at all times, you mustn’t fly over 400ft (120m), and you should not fly within 150m (lengthways) of a built-up area or 50m (height) of a property. New UK rules are due to be announced in spring 2018, so it’s best to keep up to date with the latest guidelines. A good place to look is dronesafe.uk.

Of course, there are certain places where flying is prohibited, especially at airports and airstrips. Some drone manufacturers have developed ‘geofencing’ technology which effectively prevents drones from entering restricted airspaces including airports, prisons or large public gatherings. It’s like an invisible force field that will stop drones from going near places where they can be viewed as a problem.