Have you ever wished your holiday snaps looked just a little crisper, or wondered why your nose looks big in a selfie?
Two scientists from the University of Surrey are on a mission to help us make the most out of our digital cameras. 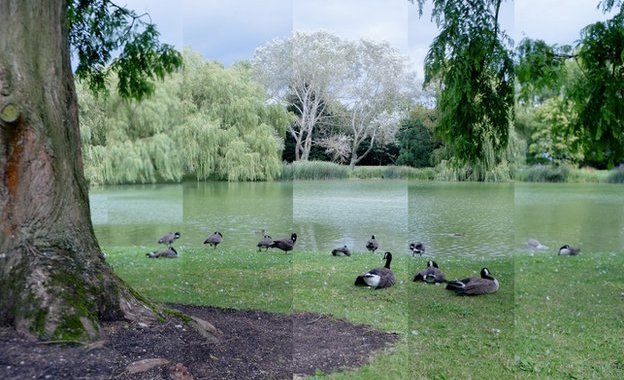 These devices, with their automated and computerised components, represent
the technical pinnacle of photography’s 200-year history – and newer, cheaper
technology arrives every year.
“But it’s still remarkably easy to take a bad picture,” says Dr Radu
Sporea.
Speaking
at the British Science Festival, he and his colleague Dr Andrew Pye are keen
to explain some of the principles that give top-notch photos that touch of
class.

One key step that is often overlooked, Dr Sporea tells me, is to think about
where you take the photo from.

“The way we move around the subject is important… Zooming
and moving around are not the same”
Dr Radu Sporea University of Surrey
Using a normal, digital camera with a fairly wide-angle
lens, being up close – say, an arm’s length away – will distort how the subject
appears. That’s because the distance from the lens to the subject isn’t much
bigger than the distance between its features.
If it is a portrait, the face (yours or somebody else’s) can seem slightly
bulbous, with a big nose and vanishing ears.
So to avoid the shot looking a bit like the famously comical monkey selfie, stepping back
can make a big difference.
This obviously isn’t much use for a quick self-portrait. But moving further
away and then zooming in, so that the subject still appears nice and large,
produces a “foreshortening” effect, making everything look closer together and
more similar in size.

The “bulbous selfie” (left) compared to a “distant
but zoomed in” portrait (middle), tested on your correspondent; the shot on the
right adds a blurrier background by enlarging the aperture (see below) 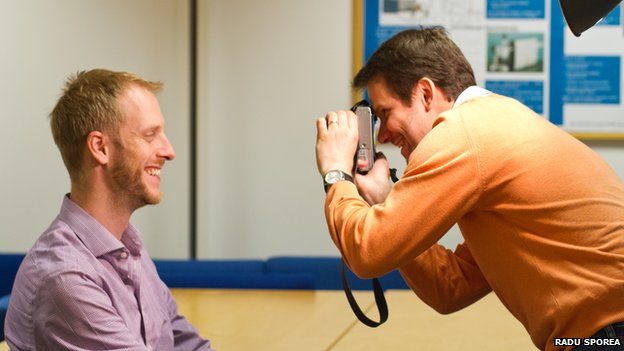 Dr Sporea demonstrated the selfie problem by taking
one for me

Even if your shot is not a portrait, this foreshortening tactic can create
interesting effects, particularly if things in your photo are at different
distances.

“The way we move around the subject is important,” says Dr Sporea. “What
people sometimes do is just sit stationary, and zoom – but zooming and moving
around are not the same.” 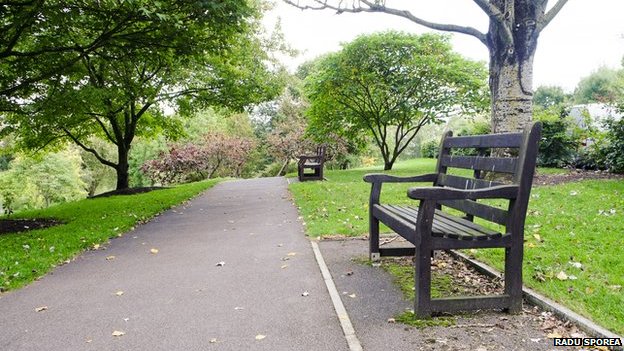 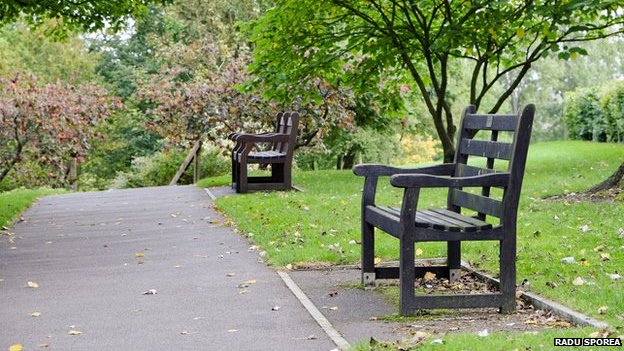 After moving backwards and zooming in, the first
bench is just as big but everything seems closer together
Perspective is also the sort of trick you can think about when all you have
is a smartphone camera.
Generally, Drs Sporea and Pye are sceptical about getting really amazing
photos out of smartphones: “You’re pretty much stuck, because it doesn’t let you
tune anything. It’s completely automatic,” Dr Sporea says. 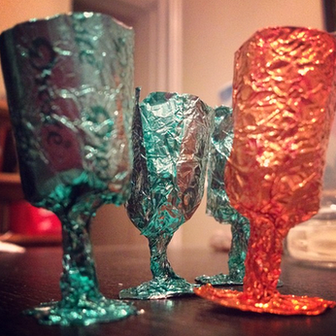 Chocolate-wrapper wine glasses, photographed at very
close range with a smartphone
But you can add some life by completely contradicting the portrait
instructions above, and getting extremely close – which can work for food or
nature shots.
“Because the lens is tiny and the sensor’s tiny, you really need to get in
close to get any separation.”

A photograph is created when light hits a sensor. Once upon a time, that
sensor was a strip of film; if there was too much light, or too little, the shot
was wasted.
Digital technology means we can re-shoot without wasting film, but getting
the correct amount of light onto the electronic sensor – controlling the
exposure – is still crucial.
Most of us are all too familiar with the washed-out and gloomy results of
over- and under-exposed photographs, respectively.
The most obvious way of controlling exposure is changing the amount of time
involved: the shutter speed. Digital cameras adjust this automatically, but it
is worth figuring out how to intervene if you see the relevant symptoms.

If the exposure time is too short (left) or too long
(right), the results speak for themselves
A digital camera can also tweak its sensitivity directly (often labelled ISO
in a camera’s settings), which can be useful to get an extra boost if the scene
is fairly dark.
Dr Sporea cautions against manually meddling with ISO settings.

Boosting sensitivity (as on the right) can make
images grainy

“This is not a physical control – you’re electrically amplifying what’s
happening,” he says. “And that’s not without side effects.”
If sensitivity is cranked right up to detect extremely low levels of light,
for example, then the tiny quantities of light hitting the sensor start to get
drowned out by electrical noise within the chip. Amplifying the whole lot
produces speckled images.

“So you want to use ISO as the last resort, basically.”

Another way to control how much light gets into the camera is by changing how
much of the lens you use. This is done by widening or narrowing the “aperture”.

This has other effects besides changing the brightness of the picture – and
these can be very useful for playing with the look of a photo. 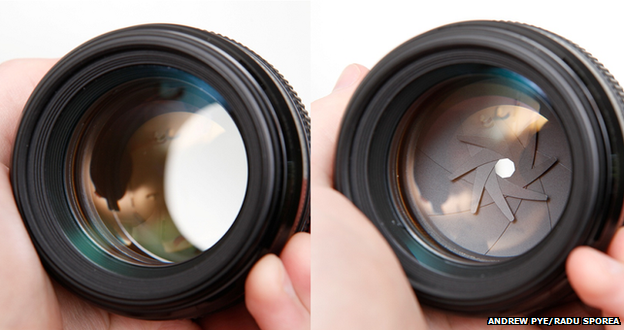 You can easily see the difference between a large and
small aperture setting, inside a big lens
If the aperture is very small, there is almost no limit to what can be in
focus within a single shot. Light from any distance can be focussed sharply onto
the sensor, because the distances involved are all much bigger than the extent
of the lens being used.
“Don’t worry about what camera you have – that’s not what
takes good pictures”
Dr Radu Sporea University of Surrey
This is why everything is in focus when you use a pinhole camera.
Photographers call this property “depth of field” – and using a wider
aperture makes it much shallower, so that only the distance you choose will be
in focus and the rest will be blurry.
Sometimes this makes for professional, atmospheric photos.
“If you’re taking portraits, you want very shallow depth of field, so only
the subject is in focus,” says Dr Sporea. So in that situation, he recommends
choosing a large aperture (counter-intuitively represented in camera settings by
a smaller number, because the value is the denominator of a fraction).
“But if you’re doing landscapes, you want as much as possible of the depth of
your scene to be in focus. So you turn the aperture down.”

A final tip from Dr Sporea and Dr Pye relates to how your scene is lit – if
you have a choice.
In particular, apart from thinking about light direction (for example, to
avoid back-lit silhouettes), the quality of the light itself can make a big
difference.
“If you have a small light – even the sun; it’s large but it’s far away, so
it appears like a point – the shadows are very harsh. There’s a clear separation
between light and dark,” Dr Sporea explains. 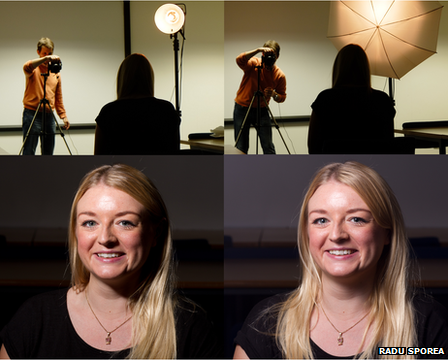 The difference between a single bright light (left –
note darker shadows) and a bigger, diffuse source – illustrated by Dr Sporea and
volunteer Amy Sutton
“So you don’t want to do photography in the midday sun, or in harsh
light.”
Covering that light with a screen or an umbrella, or bouncing it off another
surface, produces a bigger, softer light source – and its shadows are much less
obtrusive.
This doesn’t have to require expensive equipment, Dr Sporea emphasises,
pointing out that even fashion photographers have been known to improvise
with sunlight reflected off street signs.

Experimentation for the win

In summary, the advice from these scientists – neither of whom study light or
lenses, though both have been asked for photography favours by friends getting
married – boils down to trying things out.
“Don’t worry about what camera you have – that’s not what takes good
pictures,” says Dr Sporea. Just experiment with any digital camera that lets you
tweak some of these settings.
In particular, he advises summoning the courage to leave “auto” mode behind.
“It looks at the image – and it thinks it knows what type of image it is…
but it’s not always reliable.”
Instead, he suggests trying a “half-automatic” mode. Many cameras have these,
which allow you to control shutter speed, or aperture, while everything else is
adjusted for you.
With that starting point, the lesson is over.
“There’s no use just listening to us for an hour,” Dr Sporea concludes. “Go
and press the buttons, because otherwise you’ll never know.”