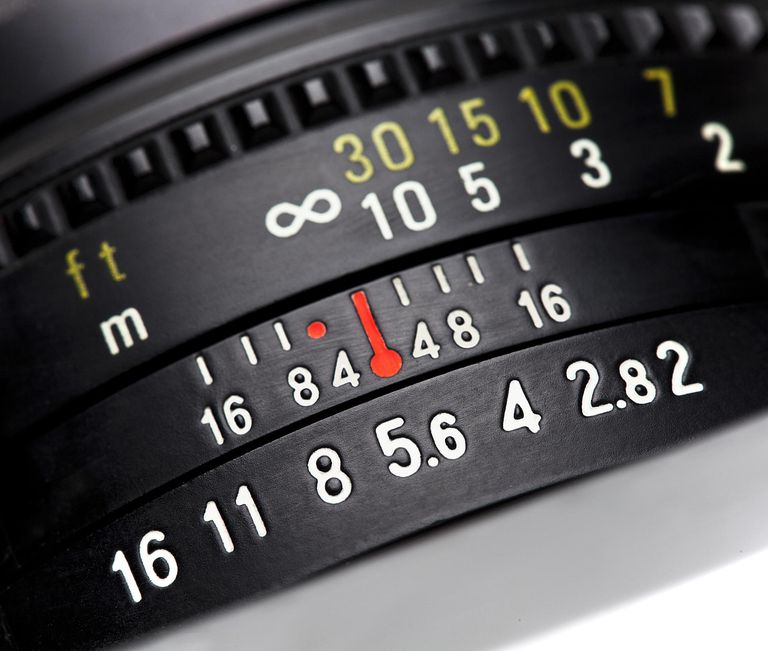 In short, aperture has to do with a camera lens opening or closing to allow or disallow varying levels of light. DSLR lenses have an iris within them, which will open and close to allow certain amounts of light to reach the camera’s sensor. The camera’s aperture is measured in f-stops.

Aperture has two functions on a DSLR. In addition to controlling the amount of light passing through the lens, it also controls depth of field.

When shooting photos with an advanced camera, you’re going to want to understand aperture. By controlling the aperture of the camera’s lens, you’re going to greatly change the way your photos look.

The Range of F-Stops

F-stops pass through a huge range, particularly on DSLR lenses. Your minimum and maximum f-stop numbers will depend, however, on the quality of your lens. Image quality can drop when using a small aperture (there’s more on that below), and manufacturers limit the minimum aperture of some lenses, depending on their build quality and design.

DSLRs have more f-stops than many film cameras.

Aperture and Depth of Field

Let’s start with aperture’s simplest function first: Its control of your camera’s depth of field.

Here’s where it can be confusing…

When we refer to a “small” aperture, the relevant f-stop will be a bigger number. Therefore, f22 is a small aperture, whereas f1.4 is a large aperture. It’s extremely confusing and illogical for most people since the whole system appears to be back to front!

However, what you need to remember is that, at f1.4, the iris is wide open and lets a lot of light through. It’s therefore a large aperture.

Another way to help remember this is to recognize that aperture actually relates to an equation where focal length is divided by aperture diameter. For example, if you have a 50mm lens and the iris is wide open, you might have a hole that measures 25mm in diameter. Therefore, 50mm divided by 25mm equals 2. This translates to an f-stop of f2. If the aperture is smaller (for example 3mm), then dividing 50 by 3 gives us an f-stop of f16.

Therefore, as well as deciding on your depth of field via your aperture setting, you need to remember how much light is entering the lens. If you want a small depth of field and have chosen an aperture of f2.8, for example, then your shutter speed will need to be relatively fast so that the shutter is not open for long, which could cause the image to overexpose.

A fast shutter speed (such as 1/1000) lets you freeze action, while a long shutter speed (e.g. 30 seconds) allows for nighttime photography without artificial light. All exposure settings are determined by the amount of light available. If depth of field is your primary concern (and it often will be), then you can adjust the shutter speed accordingly.

In conjunction with this, we can also change the ISO of our image to help with lighting conditions. A higher ISO (represented by a higher number) will allow us to shoot in lower lighting conditions without having to alter our shutter speed and aperture settings. However, it should be noted that a higher ISO setting will cause there to be more grain (known as “noise” in digital photography), and image deterioration can become obvious.

For this reason, I only ever alter ISO as a last resort.